Bainbridge Island is vulnerable to a number of natural and human caused hazards. Specific information about each hazard is detailed on the tabbed pages below. This information has been derived from several documents, including the Kitsap County Multi-Hazard Mitigation Plan, the Kitsap County Hazard Identification and Vulnerability Assessment, and a more recent FEMA produced Risk Report. Data sets for the projected structural earthquake loss, projected structural landslide loss, and projected 1% flood loss were provided by FEMA as well and are available for download on those respective hazard pages. Full versions of each of the documents listed above are available for review via the links below:

An earthquake is the motion or trembling of the ground produced by sudden displacement of rock, usually within the upper 10-20 miles of the Earth's crust. Earthquakes result from crustal strain, volcanism, landslides, or the collapse of underground caverns. Kitsap County is vulnerable to earthquakes due to its location in the Puget Sound region, which features numerous seismogenic geologic faults. Since 1962, earthquakes have had the greatest impact of any hazard on the county in terms of monetary costs and disruptions to daily life. The Nisqually earthquake of 2001 was the most recent earthquake event that caused significant damage to Kitsap County and the Puget Sound region.

Kitsap County is vulnerable to subduction as well as to fracture faults. The County lies within Seismic Risk Zone 3, which requires buildings to be designed to withstand major earthquakes measuring 7.5 in magnitude. It is anticipated, however, that earthquakes caused from subduction plate stress in the region could reach a magnitude greater than 8.0. The Seattle fault is recognized as a significant seismic hazard; evidence has indicated that it was the cause of a major 7.0 magnitude earthquake approximately 1,100 years ago (Haugerud, 2009). The potential effects of a comparable 7.2 magnitude earthquake were modeled for the Seattle Fault zone by the Washington State Department of Natural Resources (WADNR). The scenario predicts that thousands of injuries and fatalities would occur throughout the region, and thousands of buildings would collapse or be in imminent danger of collapse.

There would also be a significant number of building losses, with damage totaling $3.6 billion in Kitsap County (WADNR, 2012-2013).The effects of a major earthquake in Kitsap County would be catastrophic. Hundreds of residents could be injured or killed, and a multitude of others would be left homeless. Depending on the time of day and time of year, a catastrophic earthquake could cause hundreds of injuries and deaths and millions of dollars in critical infrastructure and private property damage (WADNR, 2012-2013). A severe earthquake could level or severely damage older buildings, especially those constructed of non-reinforced masonry.

Newer structures, which were built under recent building codes, would probably sustain less damage, but would remain vulnerable to the soil conditions of the building site. A severe earthquake would also cause major damage to County and City utilities. The most current projected structural earthquake loss data can be accessed here.

Click on the image below to view local fault lines. 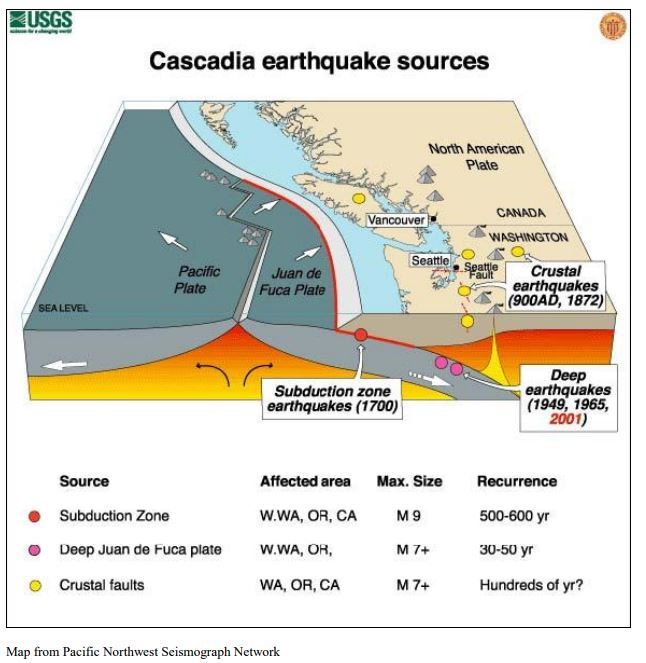 A tsunami is a strong, fast-moving wave or series of waves. They are generated when geologic events, such as earthquakes, landslides, submarine landslides, or volcanic activity, cause large, rapid movements in the sea floor that displace the water column above. In Puget Sound, tsunamis can be caused by local landslides from surrounding bluffs. The displacement of water creates a series of high-energy waves that radiate outward like pond ripples. Offshore tsunamis can strike adjacent shorelines in minutes and cross the ocean at speeds as great as 600 miles per hour to strike distant shores. Kitsap County is at risk from tsunamis of both local and distant origin. These destructive waves are most commonly caused by submarine earthquakes. Our current technology gives us adequate warning for tsunamis produced by distant quakes; however, an earthquake on the Seattle fault would have near immediate impacts.

Bainbridge Island is located in the tsunami inundation zone and current modeling indicates a tsunami resulting from a Seattle Fault and/or Cascadia Fault earthquake could produce a 1-2 meter tsunami (relative to land elevation) in certain low-lying waterfront areas. We are also at risk for a landslide-induced tsunami. This type of tsunami has the potential to be slightly larger, but more localized.

The Department of Natural Resources (DNR) has produced models indicating the tsunami inundation resulting from a 9.0 Cascadia Fault rupture and a 7.6 Seattle Fault rupture. The models can be viewed by clicking the links below. 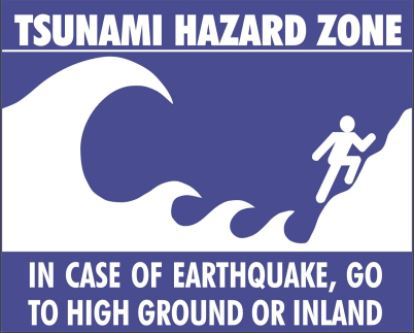 Seiche is type of vertical wave that occurs in a confined body of water. It is similar to water sloshing around in a bathtub. Seiche is normally experienced long distances from a seismic event. Puget Sound is vulnerable to seiches.

Bainbridge Island is subject to landslides and soil erosion due to wind, water, and flooding anytime throughout the year. Landslides can cause deaths, significant damage to properties and infrastructure, and in some cases, losses of the use of land for many years due to the extensive cost of restoration. Earthquakes also have the potential to trigger landslides.

Landslide occurrences on the island have been concentrated along its coastal bluffs. Several landslides were triggered by storms throughout the winter of 1996-1997. One of these storm events caused a landslide in the Rolling Bay area, which forced a house off its foundation and down a hill into Puget Sound. Several other landslides severely damage homes, roads, and utilities along the bluffs of Bainbridge Island. One of these events resulted in the death of a family of four and destroyed millions of dollars of both public and private property. This deadly landslide demonstrates the unpredictability and destructiveness of landslides on Bainbridge Island. The scar of the slide was nearly 15 meters wide and 15 to 20 meters high. While assessing the damage from this incident, the USGS also observed numerous other scars from many previous landslides that occurred on the steep bluffs of Bainbridge Island.

Bainbridge Island contains a significant number of buildings that are exposed to the effects of landslides.

The most current landslide risk data for Bainbridge Island can be downloaded here. 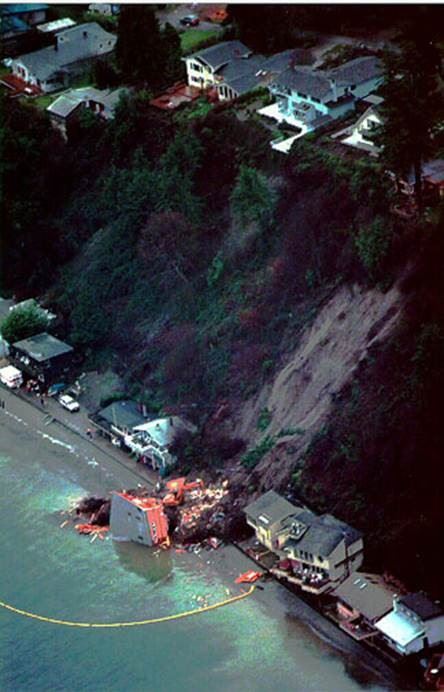 Flooding is the most common hazard occurring in Kitsap County. Heavy, prolonged rain in the fall, winter or spring months often result in saturated ground and high stream flows. Due to ground saturation, structures on Bainbridge Island located in low-lying areas tend to flood during prolonged periods of rain. Wind-driven tidal flooding is also possible along the inland waters. Flooding is due to runoff, ground saturation, or tidal flooding. Floods may result in loss of life as well as damage to residences, business establishments, public buildings, roads and bridges, utilities, agricultural land, fish and shellfish habitats, stream banks and flood control structures.

King Tides may also cause flooding on Bainbridge Island. King tides bring unusually high-water levels, and they can cause local tidal flooding. Over time, sea level rise is raising the height of tidal systems. Average daily water levels are rising along with the oceans. As a result, high tides are reaching higher and extending further inland than in the past. King tides preview how sea level rise will affect coastal places. As time goes by, the water level reached now during a king tide will be the water level reached at high tide on an average day.

Flooding can obstruct access to roadways. If possible, move vehicles to higher ground before the King Tides begin and wash your vehicle down with fresh water after driving through salt water. Elevate anything at home, such as paint cans, automotive supplies, lawn chemicals, etc. that could float away in the water and cause water quality degradation.

Bainbridge Island has the largest number of buildings in the SFHA (1-percent-annual-chance flood zone) and has the highest loss ratio which compares the losses due to flooding to the overall building value within Kitsap County. Not all of the buildings within the floodplain experience damage due to level of flooding as well as current floodplain regulations. 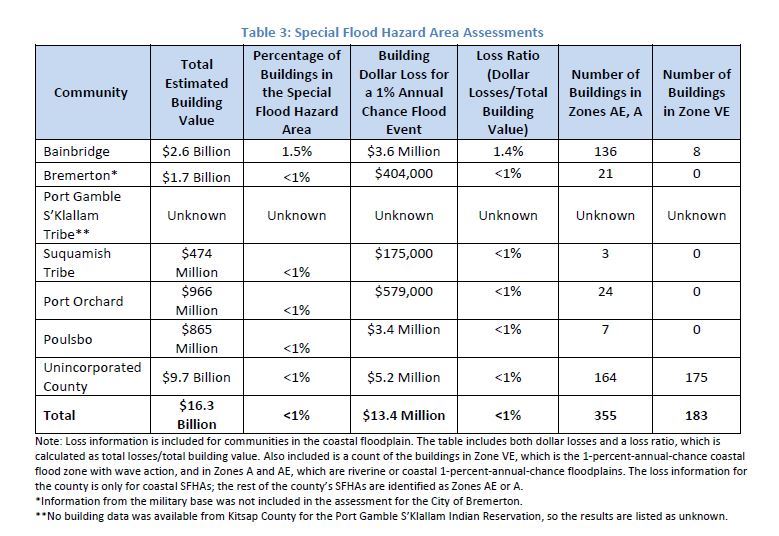