The City of Bainbridge Island operates under the Council/Manager form of government.

Ellen Schroer serves as the City’s Deputy City Manager and previously served as the Director of Finance and Administrative Services. Prior to working at the City of Bainbridge Island, she worked in finance roles for the City of Seattle.

Ellen received her master’s degree in Public Administration from the University of Washington and her bachelor’s degree in German Language and Literature from Whitman College. 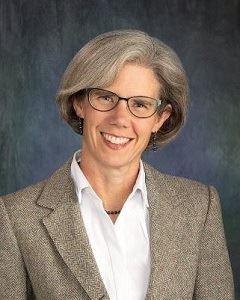 The City Attorney plans, directs and supervises legal services for the City, providing counsel to the City Manager, City Council, staff and citizen committees and commissions. Other duties include participating in decisions related to general City policies and operations; the provision of legal advice to guide City policies, decisions, and activities; drafts and interprets City ordinances and resolutions; and negotiates contracts and agreements with outside governmental agencies and private concerns.

Christine Brown was appointed City Clerk on January 1, 2017 and has worked for the City of Bainbridge Island since 2006, first as Paralegal and then as Deputy City Clerk and Public Records Officer. The City Clerk coordinates the development of the City Council meeting agendas and is responsible for the smooth operation of City Council meetings, including compliance with the Washington Open Public Meetings Act.

The City Clerk is the City's Public Records Officer and manages the City’s response to public records requests. The City Clerk also reviews and implements policies related to public records responses, monitors evolving legal requirements, and trains other City staff. Other responsibilities include updating the municipal code, posting legal notices, and receiving claims for damages, appeals, and lawsuits filed against the City.

Previously, Anne served as the Emergency Management Director at the University of California, Irvine.  Prior to working for UCI, Anne worked in Public Health Preparedness; holding positions in both Dallas County Health and Human Services and the Washington State Department of Health Public Health Emergency Preparedness and Response Program. Anne moved to Bainbridge Island from Aliso Viejo, California.

Other responsibilities include preparing legislative documents and supporting the City Clerk, City Manager, City Council and Leadership Team in the development of the City Council agenda. The Deputy City Clerk serves as Records Management Coordinator for the City and is responsible for managing records in accordance with the Washington State Archives Records Retention Schedule.

Roz Lassoff has been working for the City of Bainbridge Island since 1993 and has held positions such as Administrative Assistant, Deputy City Clerk and City Clerk. In her  role as Executive Assistant, Ms. Lassoff performs a variety of highly responsible, complex and diverse duties by providing administrative, analytical and technical support to the City Manager and Executive Department. Ms. Lassoff handles confidential and sensitive information, manages assigned programs and projects, administers contracts and budgets, and provides general office management services.