In November 2020, Bainbridge Island City Council approved the first-ever Bainbridge Island Climate Action Plan (CAP). This plan is a culmination of a three-year effort by the Climate Change Advisory Committee working with City staff, community stakeholders and the public.

The CAP has three overarching goals:

Communitywide GHG emissions increased 9% from 2014 to 2018. Achieving the goals outlined in the CAP will depend on everyone in the Bainbridge Island community working towards a clean, healthy and vibrant future.

Curious what actions will have the biggest climate benefit for your household? Want to reduce your carbon footprint, save money, and improve the health of our community? Join the Climate Smart Challenge today! Learn more about steps you can take to help reduce GHG emissions and prepare for climate change. 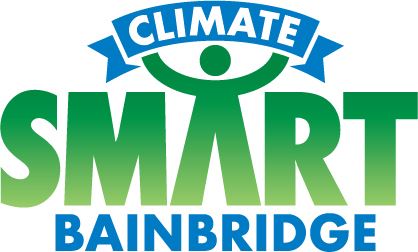 Please help us celebrate our newest Climate Smart Leader, Grace Bonow! Grace is a youth advocate for the Climate Smart Challenge, who formed a Community Group, encouraged other families at Hyla School to join the Challenge, and taught in-school seminars on the program. Congratulations Grace and thank you for your efforts to create a Climate Smart Bainbridge! 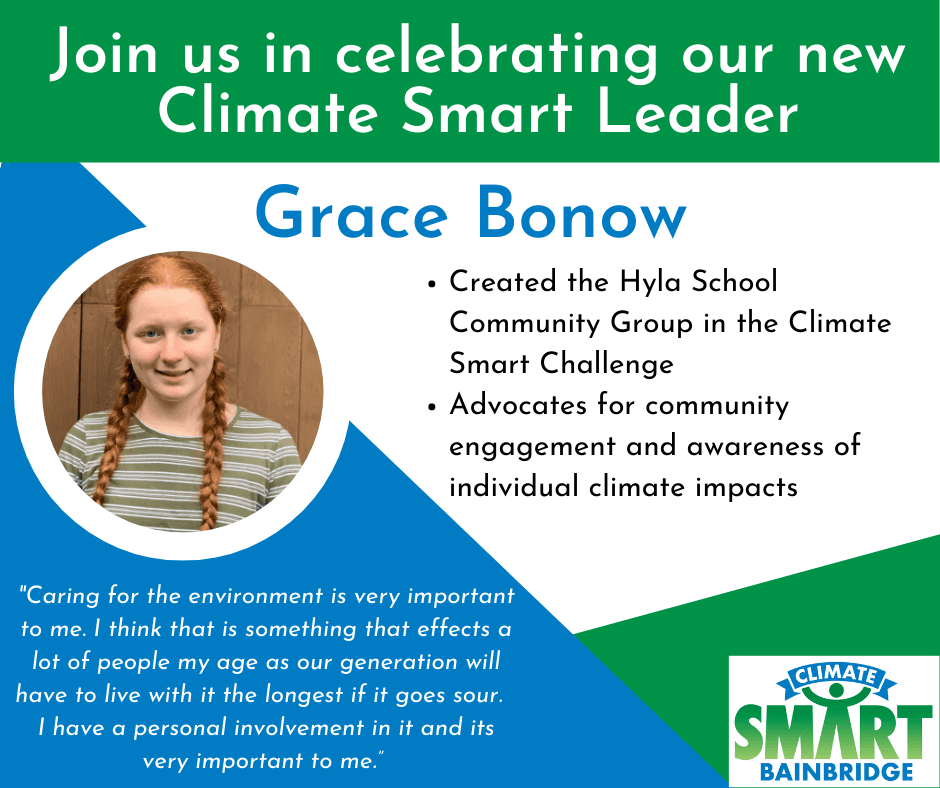 Learn More about the ETIPP Program

The recording of the January 12th webinar on the 2023 ETIPP program overview - "Getting to 100% renewable energy on Bainbridge Island" – is now available on YouTube.  The City was selected as one of 12 communities in the country to receive technical assistance as part of the second cohort of the U.S. Department of Energy’s Energy Transitions Initiative Partnership Project (ETIPP). Learn more about activities planned in 2023 to analyze the feasibility and associated costs to move the city towards a goal of 100% renewable electricity by 2040, and to increase the resilience of our electric systems on the island, per actions outlined in the 2020 Climate Action Plan.

*NOTE: All businesses have been granted a 3-month grace period to use up their existing supplies of non-home compostable food and beverage packaging for to-go orders (through March 31, 2023).

Check out the City's first annual progress report on implementation of the Climate Action Plan (CAP). This report focuses on key City activities completed since approval of the CAP in November 2020. You can also review a short summary of key achievements from the 2022 Progress Report in this one-page PDF document.

City Thread has selected the City of Bainbridge Island among a diverse cohort of eight other cities to participate in the Accelerated Mobility Playbook (AMP) technical assistance program designed to help fast-forward the build-out of their mobility networks. The City's mobility opportunities are highlighted in the 2022 Sustainable Transportation Plan (STP).

Bainbridge Island will receive AMP technical assistance that includes a community-specific mobility audit of the city’s current state of practice and an action plan for improved implementation of the STP and strengthening partnerships. City Thread’s AMP provides a roadmap for speeding project delivery, completing network-focused implementation plans, and conducting authentic community engagement. Continuing to build relationships between elected leaders, municipal staff, grassroots, and philanthropic partners will be a key component of the program. The application was prepared in partnership with the City, Squeaky Wheels and Bainbridge GreenWays.

In 2019, the City worked with Cascadia Consulting Group to complete a comprehensive greenhouse gas (GHG) emissions inventory to quantify the amount of climate pollution produced in our community.  This information is summarized in a fact sheet (PDF) and will help track progress and inform decisions related to our Climate Action Plan goals. 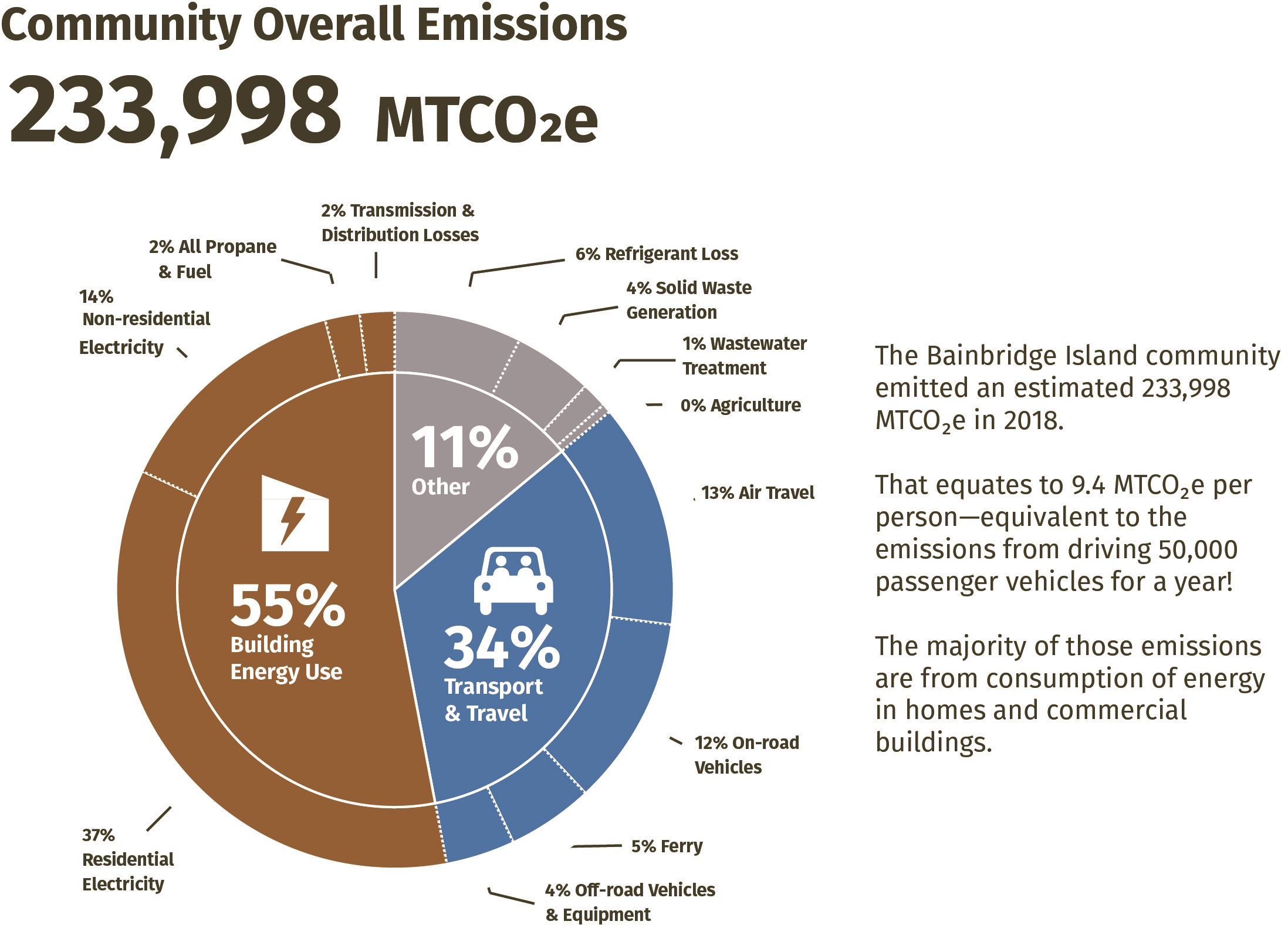 The majority of community GHG emissions stem from electricity use in homes and commercial buildings and gasoline and diesel fuel use for both on-road vehicles and air travel. Detailed information on sources of emissions can be found in the 2019 Greenhouse Gas Emissions Inventory Report (PDF), which includes three distinct inventories:

The report also presents findings from additional analyses, including contribution analyses that identify key drivers of observed trends in emissions, such as changes in weather, population, or economic activity. A carbon sequestration analysis that estimates the amount of carbon dioxide that Bainbridge Island trees absorb—or sequester—from the atmosphere on an annual basis is also included.

Learn more about what the City is doing – and actions you can take – to both reduce GHG emissions and prepare our community for the impacts of climate change by exploring the links on this page.

The quality of the environment we live in is an important part of what people often think of in relation to the City of Bainbridge Island. The City has a history of leadership in sustainable practices as noted below.

In November 2021, the Bainbridge Island City Council passed Ordinance No. 2021-34 to reduce plastic waste from food service and lodging businesses.

In June 2021, the Bainbridge Island City Council passed Ordinance 2021-18, which updated the City’s municipal code (BIMC 8.24) to only allow single-use foodservice products to be provided when a customer asks or confirms they would like to use them.

In June 2020, Resolution No. 2020-05, declared the existence of a Climate Emergency, reaffirming the City’s commitment to Climate Action.

In January 2020, the charge for a retailer’s paper bags increased from five cents to eight cents to be consistent with the charge in the rest of Kitsap County as authorized by Ordinance 2019-30. In 2012, Ordinance 2012-06, the city approved the Single Use Carry Out Bag Ordinance (commonly known as the "plastic bag ban").

In 2017, Resolution 2017-20, the city expressed its commitment to the Paris Climate Accords.

In 2017, Ordinance 2017-13, the city established a Climate Change Advisory Committee

In 2017, Resolution 2017-04, the city expressed its support for carbon pricing policies

In 2016, Resolution 2016-11, the city acted to reduce the use of neonicotinoid products on Bainbridge Island

In 1996, the city ceased using chemicals for vegetation control along roadways

In 1991, the city ensured that recycling facilities were available, affordable, and convenient to all residents to encourage reduced waste

HOW TO STAY
INFORMED